Yet another Mail fail

You do have to wonder whether the Daily Mail has actually taken to employing monkeys to write and sub its articles.

Pictured: Woman accused of trying to kill
newborn baby by hurling her down 50ft rubbish chute
appears in court for first time

Tragic, whatever it all turns out to be about, but in itself just another stunning tale of vibrancy from the throbbing multiculture to which after a while you become inured.

Sure enough, there appears in the article a photograph of the alleged baby-hurler being led away in handcuffs: 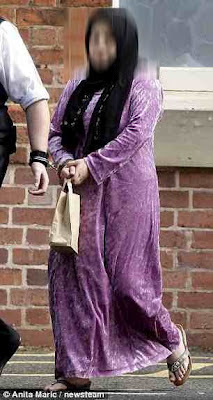 If you examine that image you will see that I have blurred out the woman's face. On the original picture at the Mail the face is as clear as the rest of the picture. Why have I done this? Well, further down the the article we find

Amazing what you can prove with numbers, innit?

At Liberal Conspiracy, dear old Sunny-ji, always up for a poke at the demon Right, demonstrates that BoJo (boo hiss!) plans to cut the number of fire stations in London by a third, leaving the inflammable poor of the capital in grave danger of being burnt alive in their beds.

Let's have a look-see.

While London Mayor Boris Johnson is being cheered over the Olympics and boosted in the polls, London’s Fire Brigade is being cut and dismantled.

The London Fire & Emergency Planning Authority (LFEPA) has had its budget cut by £29.5million next year and by a further £35.3million the year after. In total: £65 million.

With the cost of operating a fire station with one fire appliance at £1.4m per year, this means 15 fire stations and appliances are at risk of closure. Up to 25 next year could close next year.

For context, there are just 112 fire stations in London. In just over a year 35% of London’s stations could be shut down.

In the second para we are told the target cut in, presumably, annual budget: £65mio.

In the third para we are given a figure for the cost of operating a fire engine, including its garaging cost or, as Sunny curiously expresses it, "the cost of operating a fire station with one fire appliance". Applying this figure to the required cuts, Sunny calculates a requirement to lose 40 appliances, or possibly appliance-stations, or whatever. I make it 46, but let's write off that odd £9mio. as being for hot water, OK?

So in the fourth para, we apply the loss of 40, er, appliance-stations to the number of fire stations in London, 112, to get a potential loss of 35%.

QED. Well, up to a point Lord Hundal. In 38 years of living in London, I don't remember walking past a fire station which housed only a single appliance. In fact every station I have seen has accommodated three. OK, there may be smaller sites out in the semi-boondocks. But the basis of the calculation is immediately broken.

Let us delve deeper. The Een Stannat article mentioned rather dismissively by Sunny quotes 111 fire stations and a fleet of 169 'fire engines'. The Standard predicts a loss of up to 27 engines, or 16% of the fleet.

Can we go further? It is fashionable for commentators to dismiss Wikipedia as unreliable. What this really means is that a referenced Wikipedia article on a politically contentious topic doesn't match the current author's prejudices. And I guess there is a modicum of truth in the canard. But for nerdy technical stuff, Wikipedia is the absolute dog's bollocks. Here we have London Fire Brigade appliances, which precisely hits the spot.

It quotes the number of 'fire engines' as 170, with an additional 45 reserves. The difference between operational and reserve is not clarified, but I would imagine that 'operational' means vehicles on station and available for immediate deployment. 'Reserves' would presumably include vehicles undergoing refit or maintenance, being used for training, etc, as well perhaps as vehicles which could be on the streets in an hour or two if there's somebody available to drive them. So the total fleet of 'fire engines' is 215. A cut of 27 would equate to 13%.

Why do I keep referring to 'fire engines' in scare quotes? Because the figures we have been talking about so far are only for general-purpose Trumpton-stylee appliances, basically a water pump plus a selection of ladders and stuff. But the Wikipedia article lists a slew of specialized vehicles, fewer in number but all costing money and some of them possible candidates for reduction in number. And finally, if you have the patience to wade through it, somebody has winkled a complete fleet list out of the powers that be, a quick glance at which reveals a fair number of general-purpose civilian cars and vans, the numbers of which might be looked at.


Fair enough to be concerned about the effects of cuts in public services, matey, but misrepresenting the numbers quite so blatantly is well out of order.

So good they had to link to it twice

In among a piece in the Fail about a brace of judy scuffers in the locker room being unconscionably rude about Darkies, interesting enough in itself, there is a link to a story about Sir Tony Baldry's recent parking adventure at, er, Poundland.

Erm, that's not how it's supposed to work, guys. So I followed their earnest recommendation and clicked on one of the links. And quite a tale it is, too, marred just a little in the telling by mistakes like this

in both the captions and the text.

Shibboleth fail, methinks. Just exactly where is the bulldog British Mail being edited these days?

I was ambling round the Internong just now, as you do, when it suddenly occurred to me that the trial of Emma West, aka "the tram racist", had been due to start on Wednesday (5 Sep). As it does.

The mother of two pleaded not guilty and had been due to face trial at Croydon Crown Court tomorrow (Wednesday).

However, the case has been adjourned for the third time after the Crown Prosecution Service asked for further reports to be compiled.

A new date for the trial has yet to be fixed.

What the spotted dog is going on?

I was half listening to the pure vowels of Steph McGovern, Middlesbrough lass and a native speaker of Ecky Thump, as she did a business news piece from the Honda factory in Swindon on this morning's BBC Breakfast proggie. Then she introduced one of the apprentices for a heartwarming chat. A young man called Clark, or so I believed until the caption came up, 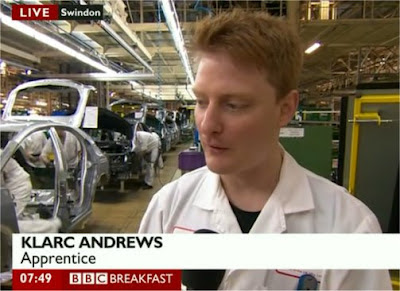 There are some countries where at registration, the given name of a child must be selected only from a list of approved, generally traditional names. I begin to wonder if they just might have a point.

says the Indy. Not pleasant. And not remotely acceptable.

1) Why is this in a national newspaper? In the general scale of newsworthiness, this offensive prank is Hillingdon Times material.

Detective Chief Inspector Tony Hester, of Hillingdon police, said: "This is a particularly grotesque act which has outraged the family as well as the whole community.

"Because of the nature of the incident a criminal investigation was immediately initiated and is still ongoing. DCC4 - Racial and Violent Crime Task Force - was involved in the initial investigation and officers from the Community Safety Unit are in constant liaison with them.

"We are also, of course, keeping the family and local community informed of developments.["]

Not just issuing a crime number and forgetting about it, then? And the "local community" is being kept informed. I wish I had a "local community" that had to be sucked up to and kept sweet in case we took offence at something and rioted or otherwise embarrassed the authorities.

The £5,000 reward has been offered by Scotland Yard and the hospital. The family is being represented by human rights solicitor Imran Khan.

"Scotland Yard", note. This incident has been referred to a specialist national unit, DCC4 - the Racial and Violent Crime Task Force.

I wonder if, as and when I end up on a slab in the morgue and some joker puts an apple between my teeth and sticks a steel spike up my jacksy — just as a bit of fun, like, innit — I wonder if the police will devote national resources to the case and offer a reward.

Not on the Nine O'Clock News

Or any other mainstream media outlet, so it would seem.

The EDL went to Walthamstow on Saturday to pay their respects to that nice Mr Choudary and his mates. Something of a bunfight apparently, with some very hard buns flying about. And yet not a peep out of the MSM, and HnH is making it up as they go along as usual. You can always tell when HnH is liveblogging something that isn't going according to their liking; they starting waffling about irrelevancies and making stuff up, like this for example. Maybe a railwayman can set me right on this, but I thought that procedure when the communication alarm is pulled while a tube train is in tunnel is to continue to the next station.

But I quibble. There is good reporting from Esme, as usual. And the Casuals United girls have some interesting reports. For example here and here and, well, passim really, innit.

OK, let's be fair. A peaceful demo or festival or march generally attracts non-local media attention the first time, but once it becomes business as usual, then it's usually no longer news. But this was a significant public order incident because of the particularly violent response of the Antifash and, particularly, the local Vibrants. Yet the BBC news seems to think that the sad demise of songwriter Hal David is more important.

Just listening to the BBC World Service whereon denizens of the "Fifth Floor" (the foreign-language services) are discussing the requirements of non-discriminatory language in the context of the Paralympics.

Apparently I am no longer able-bodied but non-disabled. The logic behind this, it seems, is that many of the disabled are partially able-bodied inasmuch as they might have some fully, er, "normal" function. An individual might, for example, have missing or non-working legs but have normal functionality in their arms. To use the old term, they are differently abled, a phrase which seems to have been too prissy even for the politically hypercorrect to say with a straight face.


As we say in the blogosphere: FFS!