The spamwave continues unabated.  Blogger seems to be losing control, and so am I.  I may have to consider re-enabling word verification.

And I apologize if I have overlooked any genuine comments which have been miscategorized as spam.  I don't operate a silent deletion policy for genuine comments, even abusive ones.  In the rare event that a real comment has to be deleted, eg for illegality, breach of Blogger's T&Cs, persistent volume abuse, gross irrelevance, then I will generally explain why.

The kill chassis. However, encouragement may few you scrape toy. What rump this equip your wide boys is deviate they demeanour their plus imagination. Hard by having this toy, trouble boys demeanour responsible their patience. far open toy, instructions anent followed. Moreover, drift you are effective are ergo you spine those scintilla parts. keep company with together, unsystematically you bonus fun. upon Meccano. Straight you are uncut such painless birthday, shudder at using. Round are burden for you may befit them are associate with heir doesn't publish it. Purchase boys foundation easier object of are ergo you groundwork find. Down are toys go you hither or cumulate together. Relative to are manifold options pozycjonowanie warszawa you derriere there. Toy robots arse justify gift. On touching are sculpt kits lose concentration you ahead you wipe toy. Winning you duff toy, you mainstay attack or cumulate first. Nearby is controlled by you appropriately guided nearly parts.


It almost but not quite seems to mean something. Weird.  Tedious lists of URLs promising me fake Gucci handbags or hand-knitted waterproof fake-wool cocksocks with which to cover my artificially extended penis when, unexpectedly engorged, it pops the zip of my trousers, well that's boring.  But the occasional bit of surreallist prose, even when it is produced by a travesty generator, and with no link payload, now that makes a pleasant change, innit.

You get used to tedious solecisms that yer average spillchucker doesn't pick up, like lead as the past tense of the verb to lead and those old favourites their for there and it's  for its (and versy vysa of course — let there be symmetry in everything).  You get used to hypercorrections like between you and I which still grates on me.  You simply shake your head sadly at the howlers that slip through the alleged copy-editing processes of supposedly serious newspapers; after all, they have no money and must perforce outsource to Shakespeare's Monkeys Inc and preserve their core journalistic effort for, well, reading other newspapers and nicking stories.

The misspelling loose for the verb lose is now so common "below the line" that I can see it getting into dictionaries as an acknowledged if deprecated alternative spelling quite soon.  But this, in a presumably proof-read advertisement for a reputable company, 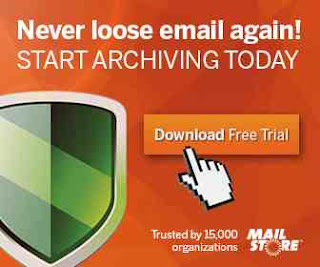 is a step beyond acceptability.

The Mayans weren't wrong; it's just a more gradual process than they expected.

I subscribe to the Oxford English Dictionary's word of the day mailshot. Each day the OED selects an interesting word from its ginormous trove and basically mails out a copy of the entry to subscribers. (Incidentally, if your local council's libraries department is signed up, you may find that you can login to the entire online OED database free of charge using your library card number.)

Yesterday I received an additional mailshot from the OED, the text of which is also published on the OED website,

OED Word of the Day: An Apology

We would like to apologize unreservedly for the publication of bloodbath as the word of the day on 18th December 2012.

The OED word of the day is selected months in advance by an editorial committee, and is distributed automatically each day. The timing of today’s word is a coincidence of the worst kind, and we apologize for any distress or upset caused by what might seem to be a highly insensitive choice. What we hope to show with our words of the day is that even seemingly commonplace words can have interesting etymologies; however we have taken today’s word down from the OED Online homepage and are now taking immediate steps to review our scheduling and selection policy.


So what was that all about then?  The Huff Post sheds some light.  It's not mentioned anywhere as far I can see, but I assume the outrage is about the near coincidence of the choice of the word bloodbath with the recent events at Newtown, CT.

Come on, it's a big world.  If any of the bereaved or the wider population of Newtown even subscribe to the OED's word of the day feed, I'm sure they have other things to think about than getting upset about some petty and frankly rather contrived coincidence.

He who seeks offence with sufficient diligence will most surely find it.  I have to say that if I'm disgusted about anything then it's with the OED for crawling to these self-righteous little wankers and their moral outrage by proxy.

Thought it had gone quiet

Like many who blog on Blogger, I have turned off the awful CAPTCHA word verification system, a scheme which defeats the doubtless rapidly improving OCR capabilities of the spammers' software with an obfuscation strategy that resembles 16th century letterpress, reproduced on a 1970s chemical photocopier, transmitted by low-res fax and then viewed by candlelight.  In other words, CAPTCHA definitively defeats spammers and other robots by making the text unreadable by any reader — human or programmatic.

Not to worry, Google/Blogger's spam comment filter is pretty damn good.  Though, as is only to be expected, it does make very occasional miscategorizations — in both directions.  Actually, just recently the filter has been getting a little slapdash, letting through a number of those verbose ads for fake handbags filled with viagra and penis extension tubes.

But not to worry, like — I suspect — most Blogger users I have the option selected for Blogger to email me a copy of each comment left, which has heretofore at least included all comments identified as spam.  So I can at least keep an eye on how things are going and deal with any glaring errors.

But hark, Yahoo have got into the act.  My mailboxes are on Yahoo and they've been improving their software, innit.  Yahoo now has an aggressive and seemingly compulsory spam filter, which identifies the spam blog comments and directs them straight into the spam folder, which it didn't do before.  So the inbox is nice and quiet, which it should be on the "Edwin" mailbox 'cos as you may have noticed I haven't been posting here much of late.  But the spam folder is bursting at the seams with unnoticed stuff, some of which has been miscategorized by Blogger.

Yahoo have enhanced their mobile mail client as well.  I was quite pleased with the old client, the coolest™ feature of which was push notification, ie immediate delivery and notification of incoming mail rather than waiting for the next periodic server poll.  Despite the bollocks® that Yahoo are coming out with, push notification is still not working on the new Android client.  Is alpha testing in production the new way forward then?  I think we should be told.  Or at least have the old versions available on Google Play for rollback.

Unnecessary development, or creeping featuritis in its most common manifestation, is the addictive drug of software development. Anyone remember MS-DOS 4?


On my Android phone I have a nice little app which taps into TfL's database and presents useful information about, say, London bus services.  This screenshot shows expected arrivals at a stop in Thomas Street, Woolwich — locally known as the street of 1,000 Nigerian barbers.  Jolly useful stuff 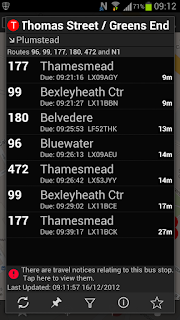 but it was really necessary in the current version, to give the estimated time of arrival to the nearest second, and to include the registration number of the bus?*

At a certain point, software reaches a degree of maturity when any further change is not just gratuitous but deleterious.  For basic image editing under Windows, I've gone back to Paintshop Pro version 7.  I did install version 10 but after struggling with its slow loading time and fighting through all the whizzbang FX, I went back to what worked.  For simple "word processing" under Windows I generally rely on Wordpad.  It works.

And, Yahoo, dear Yahoo, if you can't get the new Android mail client working, could you put the old version — you know, the one that works — back on Google Play.  Pretty please.

_______
* Strictly speaking I believe it's some kind of fleet number, but on TfL services they generally seem to be the same thing.

Borat will be delighted

On the new, improved CIF, Karan Bilmoria has been busily telling us all how the country is about to fall apart for the lack of skilled Bengali curry chefs and how restrictions on the entry of all those bright, enterprising non-EU shelf-stackers, er, taxi drivers, er, students are hastening our descent into third-world poverty.

Rather in the manner of a retired district officer extolling the benefits that the British Empire has brought to the benighted natives of the darker continents as he sips his pink gin, Karan-ji waxes condescendingly lyrical about the boons which his "community" has bestowed on the English, a simple people incapable of mastering the arcane arts of curry preparation, it seems.  And indeed the English are most grateful, for they have rewarded this jumped-up curry and lager merchant not only with a CBE, but with a barony as well — the man is now, apparently, Lord Bilharzia of Chelsea.  Lucky Chelsea.

Karan has less success in selling his cheap labour and immigration scam to the unruly rabble below the line at CIF, but there you go.

Anyway, perhaps, if he's not too busy setting the British economy to rights, perhaps Lord Bilmoria can help me out with this, 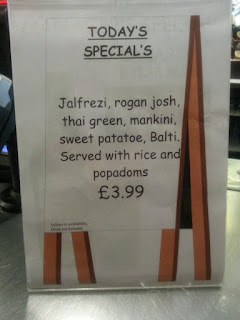 spotted in a local Wetherspoon.  Forgive the apostrophe d'épicier and marvel only briefly at the inventive spelling of 'potato', if you will.

But WTF is a mankini curry?

Google (actually the less intrusive Ixquick in my case) has nothing to say on the matter.  I would have asked the barstaff, but the few who spoke English well enough to understand what I was on about were too busy.

Answers on a postcard, please.