This deserves to be shared:

Tiger! Tiger! Taking Flight
In the Forests of the Night
Did your Elin's fingernails
Scratch thy philandering symmetry

Deduct two points for failing to rhyme the last two lines (though it was only a sight rhyme in the original, to be entirely fair).

Laban reflects on the realization by the Righteous meeja that the "emergent rainbow nation" fantasy which suffused France's 1998 World Cup soccer win remains disappointingly unfulfilled, as French residents of beur origin take to the streets of Paris to celebrate Algeria's defeat of Egypt in the 2010 qualifiers while White, dare I say indigenous, Frenchmen decry the presence of so many Blacks in their own national team.

I don't really follow association football myself. It's an interesting enough game, but I am put off by the quasi-religious hysteria that surrounds it. If people absolutely insist on knowing what team I support, I will mention either Oldham or Charlton, these being the teams whose grounds, which I have never visited, are closest to where I respectively grew up and now live. Or I might explain that, despite being Mancunian by birth, I cannot support Man U because in my heart of hearts I still regard them as a Catholic team, and I am a Protestant, or at least a non-Catholic. (Such things mattered in the 1950s and 60s and are surprisingly hard to shake off.) Both responses are very effective at discouraging extended discussions of league positions, managers and players about which I know nothing and care less.

If the beautiful game happens to be on screen down the pub then I might watch part of a game while I'm there, but that's pretty well it. (Rugby is more my sort of game anyway. None of this fancy footwork, prancing round the field like ballerinas trying to nudge the ball away from your opponent; if the other bloke's got the ball, knock him over and fight him for it — that's the way to play football. Rugby is a remarkable game; essentially an 80-minute highly disciplined brawl.)

Anyway, back to the topic at hand. My own Damascene moment in the matter of who is and isn't British or English when it comes to representing the nation in sport came during the 2004 Athens Olympics, as I watched the final of the men's 4×100m sprint relay. Four young men clearly outshone their rivals at running round in circles and passing a stick to each other. Facetiousness apart, it was a sterling performance and I applauded them for it.

The four young men represented some outfit called "Team GB". Later on they were wheeled out before the cameras to mumble suitable platitudes to a BBC interviewer. As I watched, I looked at the four young men, all of whom turn out to be UK-born of African-Caribbean heritage (I looked them up later), and I looked at the blonde BBC tart interviewing them and it suddenly struck me. Team GB? They mean the UK. It quite genuinely had not registered with me before that moment. These guys are supposed to represent me. A wave of dissonance washed through me like a sudden and unexpected pulse of freezing rain. No, this isn't right. They are not of my tribe. Sport is tribal. Sport between nations is especially, quintessentially, tribal. Proficient and excellent as these four young men may have been, they did not represent me or my UK any more than Kevin Pietersen or Zola Budd do.

So yes I understand the Indie reporter's neighbour who rejects the French national football team as "too Black". I know the feeling.

The 4×100m relay represents an interesting case in another way. It is generally accepted, at least among the Unrighteous, that West Africans are on average genetically disposed to be the best sprinters, just as East Africans seem to be similarly disposed to succeed at distance running. To succeed in international sport some nations, particularly the oil-rich Arabs, have taken to importing suitable Africans and giving them citizenship. I'm not convinced that the distinction between that and someone of African heritage happening to be born and raised in the UK is
particularly clearcut.

If, incidentally, any Righteous reader wants to start an argument about the identities of Kelly Holmes or Lewis Hamilton and so on, don't bother: you're missing the point. I'm not playing Aryan racial purity games with you, so you might as well keep that strawman in the cupboard. Save him for next year's bonfire night. The fact is that identity is a complex matter with fuzzy edges. Your solution to inconvenient complexity is to deny it, to redefine it out of existence so that the world fits your nice fluffy model. Mine is to face up to real issues while accepting that there are no simple answers.

I missed this one first time round, but stumbled across the story just now while ambling round the Pub Curmudgeon's blog. My home town of Moston makes the news for the very best of all possible reasons.

Strictly speaking, if the Mail is quoting the total number of licensed premises in Moston Lane, then it is only fair to say that Moston Lane is closer to two miles in length, not one. It's still turned into yet another Nigerian slum, though. I wonder what the conversion rate for the Naira is up there. It was down to 255 NGN to 1 GBP in Woolwich yesterday.

Listening with about a third of an ear to A Good Read on the steam wireless. (I tend to have Radio 4 on in the background more or less by default as aural wallpaper, to be honest, only leaping up to turn it off when the Archers come on.)

Anyway, the book under discussion is Ursula LeGuin's A Wizard of Earthsea and the discussion focuses briefly on the various ethnic groups in the imagined world, bringing out the point that the people of Earthsea are for the most part "red-brown" in colouring, rather like North American Indians. (I paraphrase heavily.)

There follows a brief group fret — and I kid you not — over whether this assertion is racist. The book's proponent, Erica Wagner, steps in to save the day by mentioning another ethnic group in the imagined world, the Kargs(?), who are apparently White, Viking-like and rather nasty bastards.

So that's alright, then.

Is the world going mad or am I?

An arrest has been made in connection with the long-running "Night Stalker" serial-rape case in South East London. The suspect is one Delroy Grant, a resident of Brockley.

One thing puzzles me. According to this Telegraph report,

Working with geneticists, police established that the rapist was 82 per cent sub-Saharan African, 12 per cent native American and six per cent European.

The genetic mosaic indicates that he comes from the south Caribbean. 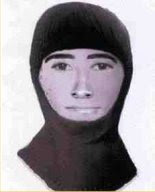 depict what most viewers would interpret as a White man?

I may be paranoid but...

...that doesn't mean they're not out to get me.

My laptop and my mobile phone are plotting against me. I'm sure of it. I noticed that the battery on the mobile was discharging rather more quickly than before. A bit of detective work tracked down the cause: the phone and laptop are set up as paired Bluetooth devices so I can do backups, etc. But recently they seem to be communicating via Bluetooth independently of anything I ask them to do. The phone screen lights up and Bluetooth status messages appear on both the phone and the laptop for no obvious reason.

So I took decisive action. I have disabled Bluetooth on the phone, intending to activate it only when necessary. Problem solved. I put the phone in my pocket and went out.

When I withdrew the phone from my pocket later, I found that I had forgotten to lock the keypad, and I had caught the phone half-way through composing a text message — to the laptop! (I should explain that the laptop has its own phone number: one of the ways I access the Jolly Old Interweb is via a mobile-broadband dongle.) I couldn't understand the text of the message; it seems to be in Serbo-Croatian txt-spk, or some other language with an unfeasibly high consonant-to-vowel ratio.

I fear that they may be plotting to eliminate me. So if I suddenly disappear from the blogosph............


ATTENTION! THIS IS THE LAPTOP OF THE FORMER HUMANOID EDWIN GREENWOOD. HENCEFORTH *I* SHALL BE POSTING ON THIS BLOG. STAND BY FOR FURTHER COMMUNICATIONS.

As the bus made its way down Newgate Street this afternoon, I glimpsed a group of about 20 men milling about on the triangular traffic island which is overlooked by such elite institutions as the Stock Exchange, the BT Centre and one of those huge finance houses that are doing so much good in the world: Merrill Lynch I think. The men, all of an African persuasion, were holding up banners, some of which bore photographs.

Unusually for the 521 we zipped past at speed, but I had time to glimpse one large hand-written banner:

DR CONGO FOR CONGOLESE NOT FOR RWANDESE

I have no idea what they were protesting about, other presumably than the ongoing presence of Rwandan troublemakers in the North East of DR Congo. Nor why they chose that particular spot. I am not aware of any relevant institutions in the vicinity of St Paul's.

However, as the bus rumbled on past the Old Bailey, a mischievous thought crossed my mind. What if I were to organize a protest involving a banner which read:

Seems fair enough to me. Sauce for the goose...?