The end time is nigh 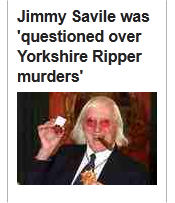 Actually, when you read the article, an anonymous tip-off, one among doubtless many from nutters and obsessives, was made pointing the finger at Savile and was perfunctorily investigated as a matter of routine and dismissed.

This is really becoming quite sinister.  Soon the Sunday Spurt will be publishing reports of two-headed lambs being born with the births being attributed to the curse of Savile.  (Although, given the nature of the Spurt and its publisher, it could well be a — pardon the expression — toss-up as to whether the teratogenous outcomes are the result of direct impregnation by Savile rather than malign influence.)

Within weeks, howling mobs will be roaming the land wielding ... well, you can't get the pitchforks these days but I'm sure they'll find something, baseball bats probably.  People deemed to look "funny" will be convicted by ad hoc people's courts of being closet savilists and will be ritually immolated on filling station forecourts.

I've not felt so nervous since the death of Diana.

Comments:
And the family are now said to be agreeing with the idea of exhuming his body and cremating the remains because people object to its presence in the same vicinity as their loved ones.

As far as Leonard Rossiter is concerned, it is a well known method of those involved in the 'arts' to calm themselves down by doing a nifty fifty shifty before (or after) a performance - the other option is throwing up pre appearance! - so the fact that only one actor has been named as being caught in such an act says a lot about the quality of today's investigative journalists! I have even seen Army soldiers (and the occasional officer) doing the same after returning safely from an operation (military, not medical). Such stories have been heard from as far back as the Roman gladiators, and probably before then.
As for exhuming Savile's bones, if they do, can they include Hindley, Moat and several others grind them up, and feed them to the pigs? The Muslims will be happy as this will no doubt mean fewer people will buy bacon - a happy time all around.
Penseivat

A friend who was involved with the motor racing game once told me that it was quite common for Formula One drivers to become so "excited" during a race that they would come in their pants, no manual assistance needed.

I wonder if there's a thriving — if disreet — market among journos (and groupies) for Lewis Hamilton's and Jenson Button's used underpants.

Yes, yes, dig the body up and beat it with sticks, then burn it. Lest the evil spirit enters some other poor charity worker or celeb and carries on it's corrupt purpose lol.