Marketing for by dummies

I mean to say, would you buy a beer with this name? 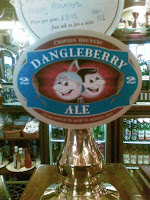 Apparently, it's "Guaranteed to blow ya berries off".

If the bottom has fallen out of your world,
Try drinking Bass and have the world fall out of your bottom.

Communicating in the Multiculture

From the brief snatches of the conversation I overheard between the bar personette and her off-duty compatriot who was sitting at the bar, she was not, for once, Polish. They were definitely chatting in a language from one of the more obscure reaches of Common Europe but I couldn't pin it down from the small sample. (One of the legacies of doing your degree in general linguistics is that it leaves you knowing a little about a lot of languages combined with the ability to usefully speak none of them.)

The customer waiting at the bar was most decidedly from Norn Iron and well towards the John Cole end of the Clugston-Cole comprehensibility spectrum. A stand-off ensued. Eventually, being on the whole a sympathetic sort of geezer, I felt obliged to intervene to translate the Irish chap's request into something the barmaid could understand. (I may be an uppity oik from the foothills of the Pennines, raised among the clustered isoglosses which separate the North Midlands English of Manchester from the Northern English of Oldham and Rochdale, but I can turn out a pretty passable RP if I have to.)

The gentleman from Norn Iron successfully completed his transaction and returned to join his companion.

And then a Scotsman approached the bar. I finished my Japanese lager and departed promptly thence.