Fiona Pilkington, ignored by the authorities and driven to a desperate end by, apparently, the antisocial behaviour of one local "problem family".

Well at least Ketlan and Denise are pleased.

Out of the mouths of babes and web designers

From the Daily Star:

I find myself wondering if the scare quotes around the word 'NEWS' are indicative of an outbreak of editorial honesty.

Mass brawls broke out between Muslim and white groups on the streets of Swansea on the eighth anniversary of the 9/11 attacks.

Around 60 people were understood to have been involved in the two connected incidents outside Swansea City Mosque on St Helen's Road and Sin City nightclub on Friday night.

Nothing to see here. Just another evening's vibrant social cohesion in the Happy Multiculture.

But there's something else interesting about this piece. 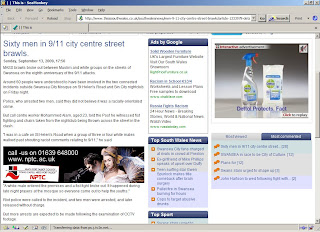 Look at the box in the lower right-hand corner of the screenshot (you will need to click on "Most commented" to bring this up if you are looking at the original page). It would seem that the article has attracted some 28 comments from readers. 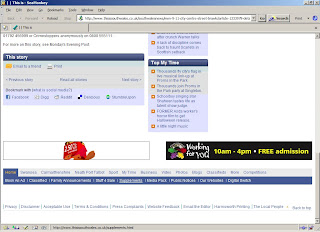 I wonder where all the comments have gone. (If you compare with other articles on the site, the comments should appear directly below the "This story" box at bottom left, and there should be a "Comments" link next to the "Print" link.)

As a public service to the more impassioned contributors to comment threads across the blogosphere and the MSM who have offered their frequently incoherent views on recent events in Harrow, Birmingham and Luton, I would like to offer the following small but important clarification:

EDL (English Defence League), An evolving anti-Muslim protest group, built loosely around the existing infrastructure of organized football hooliganry, and formed as a reaction to a grossly offensive Islamist "protest" against homecoming British troops in Luton on 10 March 2009.

I have also seen very occasional references to the EDP in such comments. The EDP is not in fact a protest group but a daily newspaper based in East Anglia.

The silence of the righteous

Naïve old fool that I am, I would have expected something like this to have attracted at least the passing interest of the national media:

Police confirmed they had to step up street patrols around Hannibal Road, off Stepney Green, after reports of disturbances involving up to 200 youths.

Large groups of rivals had been meeting regularly to fight and had been seen with weapons including machetes and hand guns.

One resident told the East London Advertiser: “It’s only a matter of time before someone gets killed.

“I saw one boy pull a gun out of his trousers.

“The police keep turning up but the youths are back the next night and it starts all over again.

Perhaps if I now add in the first paragraph of the East London Advertiser article, omitted from the excerpt above, it might shed some light on the wider MSM's sang froid:

Large gangs of Bengali and Somali youths have been clashing in running street battles in London’s East End, eye witnesses have reported.

Ah right, it's part of their culture, innit?

I seem to recall a comparable lack of interest in similar Bengali vs Somali intercultural events in Somers Town a few years ago.

I wonder if readers can help me. I keep seeing references to the vile BNP and to the odious BNP. These phrases occur with such frequency that they are clearly fixed collocations, rather than simply ad hoc adjectival phrases, yet the distinction between them is never explained. Are they perhaps distinct factions of the party, in the manner for example of the Real IRA and the Continuity IRA?

It's all very confusing.

Those men of no appearance get everywhere, don't they?

Listening to The World Tonight on the steam wireless yesterday evening, admittedly with only half an ear, as is increasingly my habit these days. They reported on the apparently persistent problem of racially aggravated attacks on Indian students in Australia. It has become something of a diplomatic issue between the two countries and the Australian education "industry" is suffering losses as paying Indian students are increasingly deterred from enrolling.

So who are the attackers? They remain unidentified, leaving us with the default impression that they are what most people think of when they imagine Australians, ie White people of British or other North European descent.

The reality may be a little more complicated.