Good word, vicissitudes. Redolent of an elegant fin de siècle Paris, I think of it as an undiagnosable but debilitating condition suffered, or more precisely indulged in, by bored ladies of quality.

If you'll pardon my schoolboy French.

What's that got do with anything, you ask impatiently? Nothing really, except that I can't think of a pertinent title for this post.


Anyway, my dustbin was emptied yesterday, as part of the normal route, without even the need for an email of complaint to the council's "works" department. For the first time in two months. Strange experience, as each Friday you watch dozens of dustcarts zooming around the district, each industriously collecting its assigned category of rubbish, passing tantalizing close but never actually calling at your house. It's a bit like being in a Twilight Zone plot where the house has been displaced into an alternate but adjacent universe. Or living in a disputed block of a city where an insoluble long-term conflict has transitioned from actual violence into chronic nitpicking intercommunal bloody-mindedness.

Still, my campaign of polite but persistent footstamping seems to have done the trick and normal service has been resumed. We'll see how long it lasts.

I wouldn't bore you with this trivium but for something else which has been bugging me. I was talking to a near-neighbour who was also caught up in this situation. She was telling me how she had phoned the council about it, but that she had refused to give her address because she feared being victimized by the dustmen for daring to complain. All very well, but precisely how did she expect the council's minions and/or contractors to investigate and deal with the problem?

— The bins haven't been emptied again.
— Oh yes madam, and where do you live?
— Greater Woolwich.
— Where exactly in Greater Woolwich? What is your address?
— I'm not telling you that. The binmen might drop stuff on my garden path in revenge.
— I see. No problem, I'll have the special collections team visit every domestic property in the borough to check. Thank you for calling.

I'm still trying to work that one out.

While ruminating on this piece of thinking, I visited an emporium of a well-known clothing, soft furnishings and posh-sandwich retailer, hoping to buy a new coat. I selected a likely garment, hand-crafted by ethical slave labour in China, or so the label tells me, and approached the tills, where one of the Daughters of Allah was engaged in what appeared to be haggling with the assistant. He successfully convinced her that such is not the custom in the more respectable mass-market outlets in Oxford Street and the transaction was concluded. I approached and proffered my purchase for scanning. As the amount flashed up on the till, he asked

A perfectly reasonable question, except that before he had begun to speak I was already holding out a small but sufficient wad of £20 notes towards him.

I couldn't think of a suitably anodyne response to his question. I still can't.

Is the world going mad or am I just getting old?

Incidentally, that there Google's not as clever as it thinks it is. To be honest, I find the trick of using tracking cookies to match adverts to your searches is a bit spooky. But if it finances a free search engine and free newspaper websites then I will live with it. However, every advert on the Telegraph site for the past few days has been offering me outdoor coats from M&S. Er, I've already bought the sodding coat, guys. I am not currently in the market.

Now what the smarty-pants at Google need to be working on is to tie in the tills at M&S so they know that a relevant sale has taken place. Hmm. I paid in cash; how then do they know it was me? Let's see. I paid in £20 notes. You don't get £20 notes in change, you get them out of an ATM. Record the serial numbers of the notes issued during the ATM transaction. Scan these numbers at the M&S till at the time of purchase. So, Herr Greenvood, we haff reason to believe that you were on ze 2nd floor of ze Marble Arch branch of Marks und Spencer at eleven o'clock on Wednesday, 13th June, negotiating ze purchase of ze very coat that you are wearing. Zis ties in with CCTV footage and with ze records of your mobile phone signal.

Nah, don't give the bastards even more ideas.

Right. Off down the boozer for a bottle of Russian lager. I'm not drinking that Polish muck any more; it's racist innit. I 'ad that Hermann Goering in the back of the cab the other day. Showed me 'is medals, didn't 'e?

Theresa May's proposals for tightening up on spousal visas have inevitably attracted the wrath of the Righteous. Ian Birrell's supercilious CiF rant attracts in the nearly 700 comments below the line a fascinating litany of sob stories. Whether or not the general image presented there rings true, of tearful loving couples torn apart as the non-UK spouse or "partner" is manhandled into a cattle truck to be carried off to the gas chambers deported or refused long-term settlement, that I cannot say. I suspect that in practice ways will be found to mitigate any genuine hardship.

But these folk do have something of a point. Mrs May's earnings-based criteria are remarkably crude instruments which address the actual issue only indirectly and incidentally, and many unintended cases are likely to get caught up by them. Curiously, commenter Ben2 comes closest to articulating the underlying contradiction the most clearly,

It's a small minded policy that because they can't be openly racist and say 'this only applies to spouses coming from Pakistan, India, Bangladesh' means that if you want to marry someone from one of the 180 countries that are not in the EU, and you aren't in the top 30% of earners (and if one of you is pregnant then the amount of money the UK citizen needs to earn to continue living here goes up) then you really aren't welcome here anymore.

though being himself firmly in the Righteous camp, he fails to draw the obvious conclusion.

As Ben2 rightly perceives, the problem targeted by Mrs May is the use of arranged marriages among South Asian "communities" as an immigration path into the UK for members of the extended family or clan. These are not the love matches described by CiF's below-the-line commentariat; they are alliances designed for the perceived broader good of the clan. This is not part of current British culture and is not what was intended by the humanitarian family reunion provisions of the 1971 Act, which set out to put an end to large-scale Commonwealth immigration.

You might take the happy-clappy liberal "all the same colour under the skin" view of this trend. Me, I'm an Unrighteous racist thug or, to put it another way, a normal human being, and to me it's a process of colonization and ethnic displacement and I want it stopped.

Now given the relatively well-defined nature of this issue, it should be possible for Mrs May to target it pretty accurately. Reimposition of the primary purpose rule might be an effective starting point. Preferably tightened up a bit. The arranged marriage between strangers is not part of current British culture and there is no reason for us to concede to it.

Mrs May's problem is that the anti-racist worldview pervades and dominates our society. The Tories' puzzling desperate need not to be seen as "the nasty party" doesn't help matters either. So explicitly asserting British cultural standards and the interests of the indigenous, or if you prefer, incumbent population is unacceptable. Mrs May is therefore compelled to resort to indirection, instituting plausibly non-discriminatory measures which roughly approximate her actual target.

And as a result of this unfortunately necessary charade, decent Guardianista couples are going to suffer.

Well, I hope you'll forgive an old racist monster if my sympathy is tinged with Schadenfreude.

How do they know?

On a Wetherspoons poster, I espied: 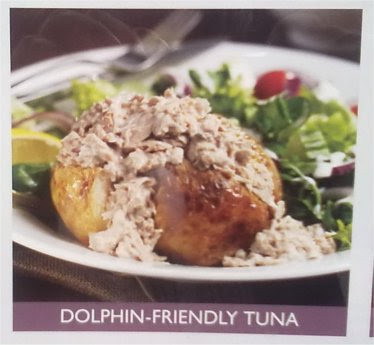 So how do they work this, then? Do the fishermen keep the tunafish alive long enough to interrogate them?

— Fisherman: So, how do you get on with the dolphins then, mate?
— Tunafish: Dolphins? Diamond geezers the lot of 'em, guvnor!
— Fisherman (shouts): Another one for Wetherspoons, Pedro.

It just came off in me 'and, ossifer

John Ward reports one of those demoralizing little encounters where one's good intentions are misunderstood by some miserable git who thinks everybody else is as self-centred as they are.

I had an embarrassing instance of something similar the other day.  My local council has been "improving"™ its domestic waste collection service.  I don't particularly mind them emptying the "non-recyclables" wheelie bin only once a fortnight, as they have been doing for the past several years.  Unlike some of my more transient neighbours I not only have a native command of English but I've been around long enough to understand how the crates of many colours work.  The fortnightly collection of the irreducible residue of landfill fodder is quite adequate to my needs.

Or would be if the buggers actually collected it.  Following the recent improvements, seemingly involving careful "reoptimization" of the dustcarts' routes, our wheelie bins aren't emptied at all.  Personally I suspect we've fallen into a lurking topographical ambiguity. It's not unequivocally obvious which street we are on; postal addresses say one thing, the layout of the road junction suggests a different possible interpretation, one potentially attractive to a binman in a hurry.

As you might imagine I have been in touch with Them.  On several occasions.  And so it came to pass on Friday afternoon that I was gathering evidence for a renewed onslaught on the forces of darkness, making my way along the street peering into my neighbours' wheelie bins to determine which ones had or hadn't been emptied that day, when a lady of the underclass happened by, dressed in one of those ultra-high viz shocking-pink pullovers that seem to pass for haute couture among the pound shop set.  She lowered her can of lager from her lips and addressed me, not unsympathetically as it happens, "Bin mining, Bruv?"

Not just yet, Love.  When my pension fund collapses and my savings are inflated away and there's no work available for retired IT engineers, perhaps.  But not just yet.