Angelique Chrisafis writes in the Guardian about the impact of the niqab ban in la belle France (via). It is illustrated with this photograph, 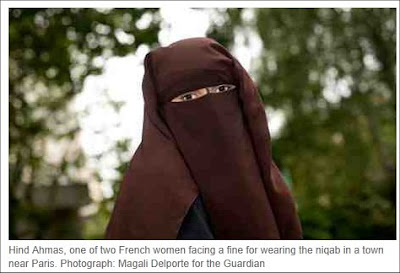 "Hind Ahmas", reads the caption, "one of two French [?] women facing a fine for wearing the niqab..."

How do they know it's her? It seems to me there's an opportunity here for our cash-strapped media to save money on photographers' time by using a single stock photograph of "a woman in a niqab". Or perhaps a small range of photos covering women of different skin colours. Ditto burqas.

For what it's worth, I would oppose the introduction of a similar universal ban on the wearing of the burqa or niqab in public places in this country, certainly when simply walking down the street. There's something "un-British" about that; and it also opens up other cans of worms — what about people dressed up in animal costumes in an advertising stunt or as part of some kind of festivity, pour exemple?

Instead I would clarify, through guidelines and if necessary through legislation, that any private or public organization which required actual or potential facial identifiability of people on its premises would be supported by HMG against claims of racial or religious discrimination. For example where a railway season ticket or building pass requires the photographic identification of the named individual, or where a shop or bank requires customers' faces to be visible to staff and security cameras.

Keep it simple: our gaff our rules.

Comments:
The fullface thing, the 'Dalek' or'Postbox', or whatever the culturally sympathetic term is, is a political statement: there is no Koranic mandate for the covering of the face, only the hair (and a general exhortation to "modest dress"). It is a Wahabist statement of the rejection of Western values, of seperatism, and hostility.
At a basic level, I doubt I could get served in a bank whilst wearing a fullface crash helmet, and I know from experience I can't get served at my local Wetherspoon's wearing a hoodie; and neither Natwest nor Wethies are particularly fascist organisations. Therefore I, for one, do not feel the essence of Britishness would be diminshed one iota by banning the wearing of a garment that practically screams "Democracy go to hell!"

One wonders how many burqa-wearers are in receipt of state benefits?. How many of the 'we-hate-your-way-of-life' crowd hold their hand out for more from the hated natives of these islands?

I am sure if we ever saw figures and put names to faces (or the ones we are allowed to see) we would be appalled.

Looks like a member of the KKK with a filthy habit.

"One wonders how many burqa-wearers are in receipt of state benefits?. How many of the 'we-hate-your-way-of-life' crowd hold their hand out for more from the hated natives of these islands?"