In this post by Jai the Prolix at Pickled Politics, we are told (as of this writing) that there are "71 comments". This is not true; there are 53 tweets and retweets linking to the post plus 18 actual comments. I don't really understand why people list incoming tweets like this; there is rarely anything interesting in the text of the tweet itself. OK, Sunny, you want to tell the world how achingly popular your blog is. If you're that desperate, fair enough, but why so disingenuous about it. Others (eg Seymour) at least have the honesty to explicitly separate out the two subtotals.

Below the line, as we apparently now say in blogspeak, we find regular commenter the well-meaning but grumpy Douglas Clark bemoaning the fact that only he and the equally well-meaning and excruciatingly even-handed Sarah Annes Brown are the only ones bothered to comment on Jai's most important post. 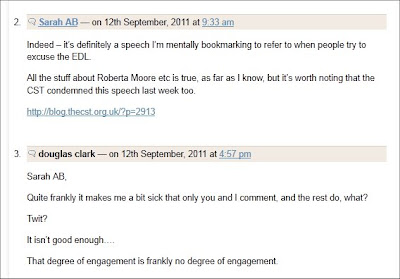 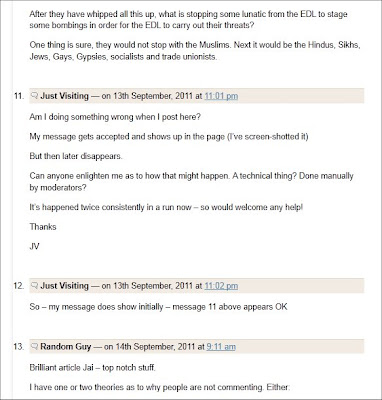 Gone, gone, and never called me Mother! Not deleted in the sense of having their contents deleted and replaced with an explanatory message, if only a standard generic one, but removed silently, without explanation. Quietly airbrushed from cyberhistory. (Well, excepting arseholes like me who are given to snapshotting untrustworthy websites.)

I'm not familiar with Just Visiting's posting history at PP but he has been a fairly regular commenter at Liberal Conspiracy where his comments have been cogent and non-abusive. Regrettably they have never toed the party line du jour.

Earlier on in the comment thread we had this exchange, 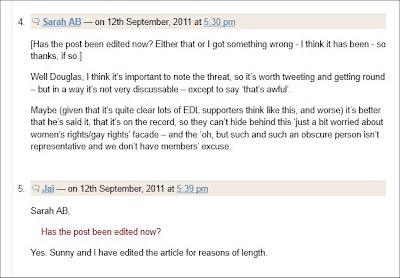 The opening post had indeed been substantially cut down: as it happens I have a snapshot of the original. If you've read any of Jai's many posts at PP without falling asleep, you'll understand why I usually refer to him as Jai the Prolix. If Jai talks as he writes, I wouldn't want to be depending on him to warn me that I was about to be run over by an approaching train. By the time Jai got to the gist, after a broad history of railways with special reference to the importance of India in their development, I would be long dead and cremated and in all probability the offending train will have reached the end of its working life, been decommissioned and scrapped.

Grudging plaudits to Sunny then for losing patience and cutting the bugger down. But to do so absolutely without notification in the case of a published and "established" post is another matter. No wonder Douglas and Sarah are puzzled. Quietly correcting unremarked typos, spelling mistakes and minor grammatical infelicities is one thing, but this is stealth editing worthy of the Ministry of Truth and is very discourteous.

So there you have it. Artificially inflating comment counts; stealth-editing of the opening post; silently deleting comments which disagree with the site's point of view. A fine example to us all.