The Empire strikes back

After 25 years I thought I had finally settled into a sort of armed truce with the Beast of Redmond. Microsoft has abused its position right from the start, as the monopoly supplier of the operating system while at the same time writing applications to run under it, effectively providing one published standard to third parties while quietly using an undisclosed and more capable set of interfaces for its in-house applications. Of course the undocumented OS calls and all those nifty direct memory pokes and peeks eventually leaked out or were reverse-engineered and became part of an unmanageable de facto industry standard. Three decades of fun and random instability have ensued as a sequence of not entirely backward compatible versions of DOS and Windows have been published and third-party publishers have struggled to reverse-engineer and and adapt.

But Windows is unavoidable and, since Win95, has been quite a decent if flaky GUI. I've never fancied the Mac, which is certainly well swish and reassuringly reliable and devilishly stylish to boot, but comes with the nagging feeling that you need to get Steve Jobs' written permission before executing each mouse click. And as for installing unapproved third-party applications, expect a visit from a couple of heavies from Cupertino who'd like to have a friendly chat. Linux is fun and great for building servers — I must have built and run a couple of hundred of the damned things over the years when I worked for a living — but it remains a constant guerilla war to keep it running as a client laptop in a changing environment. I have a little Linux netbook which I carry with me for logging into public Wifi hotspots. Switch it on in Wetherspoon's and it's up and running and connected to the free Wifi within 20 - 30 seconds, unlike the two to three pints my old Windows Vista laptop (now thankfully stolen) used to take to start. But I'm not planning to use the EeePC for anything more than web browsing using the pre-installed Firefox.

So I've accepted Windows 7 as the OS but seek out competent, no bullshit third-party and preferably freeware apps to run on top of it. VLC to watch DVDs, ImgBurn to burn the occasional CD or DVD, Seamonkey and Firefox to access the Interweb. An old version of Winamp, without the video support and the insistence on managing my media experience® which infests current versions of the program, to play music and other sound recordings. Paintshop Pro v7 for simple picture editing. Icedax under Cygwin for ripping CDs and a command line tool to compress the WAV files to FLAC. To be fair, Microsoft's very own Wordpad suffices for most basic word processing but OpenOffice is there waiting for any fancy bollocks that turns up, and that bloody paperclip can chase itself up its own jacksy.

And then my TV dongle packed up. It came as a bit of a shock, to be honest. We've become so used to these no-moving-parts electronic gizmos being ultra-reliable. You expect it to become obsolete, you resign yourself to the fact that the software is often crap, but the last thing you expect is for the hardware to fail.

Even if you've got a proper telly on the wall, these little Freeview sticks are handy to have, and so I sallied forth to Messrs Maplin's and bought myself a new one. Now these gizmos are jolly clever, a DVB-T2 tuner the size of the top joint of my thumb, no less. But the software is pushing the envelope a bit, particularly in rendering the display. One gets the feeling hardware short cuts are being resorted to. So these things have always been a bit hit and miss. Unfortunately the software bundled with the new gubbins turns out to be just too unreliable to use, on my machine anyway. And so it was that, after 18 months of using this machine, I resorted to the pre-installed Windows Media Center for the first time.

And ye Gods what a patronizing fascist it is! If I want to record, ad hoc and manually, one section of one programme, say an interview on the news programme I am currently viewing, I click on the little red button and what does it do? It starts recording OK, but also goes off and consults the EPG and automatically schedules all future episodes of that programme for recording. Very helpul, chaps, but not quite what I was after. To deal with this I have to chase through various menus to "cancel the new series". This is typical Microsoft. Plus, of course, it records not to an industry standard format, like MPEG2, oh no, it has its own proprietary closed-source disk-filling format, WTV. I hear dark mutterings that this overblown crap incorporates DRM stuff which stops you playing back the recording on a machine other than the one it was recorded on, even if it's an off-air recording for personal use. I hate these bastards.

One typical little example of the gulf between what I expect in software and what the Beast deigns in its condescending wisdom to provide: suppose I mute the sound on my laptop, for example if I am watching a TV programme and the phone rings. Like most laptops, there is an "Fn" key to facilitate this. Media Center detects this change and automatically switches on subtitles. Now that's quite clever and quite a thoughtful little feature. I'm sure people appreciate it. But why is it not offered as an elective option? Why is there no obvious way of switching it off if it is not what I require? And where is that set of pull down options at the top of the Media Center window, in particular that essential Edit|Preferences|Advanced or Tools|Options submenu? (Hmm. A thought suddenly occurs. I'll bet they're there in the inevitable "Pro" version which you have to pony up extra $$$ for. Yep, that'd be the Micro$oft way alright.)

Alright, I admit it. I'm an unreconstructed old fart with a command-line mentality. As soon as I get a new Windows machine the first thing I do is switch it to the Windows Classic interface 'cos the default XP-and-later interface is too much like interacting with a fucking Tonka Toy. The second thing I do is to kill the wallpaper and set the background to plain black and turn off any silly little noises and fatuous animations. Look guys, I know you're just leveraging the baseline experience to meet the dictated aspirations of the 21st century market and, er, sell more product an' stuff, but I'm a 63-year-old bloke who cut his computing teeth on one of these things 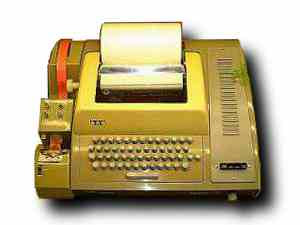 at a blistering 10 uppercase characters a second, not a podgy-fingered toddler in nursery school.

By golly that's better. I haven't had a good anti-Microsoft rant for, ooh, at least three and a half yonks. Małgorzata, another bottle of cheap Polish lager, prosze! And a quick sniff of your apron, if you'd be so kind.

Comments:
"the nagging feeling that you need to get Steve Jobs' written permission before executing each mouse click"

As opposed to the Microsoft default that everyone and anyone can do what they want with your system.

Just buy a Mac. You won't regret it.

i've bought one and I haven't!

Building GUI apps under OS X is way easier than under Windows. XCode makes Visual Studio look silly. And of course you have a full BSD layer sitting there so most of my home-grown command line Unix apps (some dating back to the early 90's) work without any tweaks (where they do it's usually just minor SVR4/BSD differences.)