Google is not always as clever as it's cracked up to be. Or, to put it another way, it's only as bright as the idiots who write the web pages it indexes. Google Ads is supposed to match suitable advertisements to web pages by analysing the contents of the page. This is not always as sophisticated as it might be. The automated process has repeatedly offered Muslim dating agency services to the readers of the Brussels Journal, for example. And, horror of horrors, has published ads for skin lightening creams on the august pages of Pickled Politics.

It now seems to be picking up the widespread and seemingly ineradicable confusion between the EDL, a popular movement campaigning against Islam, and EDF, a purveyor of electrical current to the masses, as witness this piece in the Stafford Post 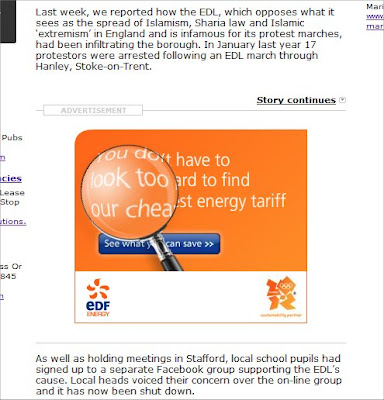 The actual article copy describes the banning of the local EDL division from meeting in a Stafford pub, following agitation by the local rag.

This week, a spokesperson for Marston’s told the Post the group had once again been ‘shut down’ in the town: “Marston’s has no political affiliations, nor do we condone the actions of their parties. However, we have over 1,700 pubs in our tenanted estate and cannot regulate all meetings that take place within them. In this instance we can confirm that there will be no further meetings of this kind at the Princess Royal.”

A strange way to show political neutrality, chaps. Genuine political neutrality would demand that you either permit all politically-tinged gatherings equally, which clearly you have chosen not to do, or that you permit none of them. At all. Can I assume the latter to be the case?

Of course, as a private commercial organization it is your privilege to be as selective as you choose. And as a private consumer it is my privilege not to give you my custom as I choose. As it happens I'm not a fan of Marston's Pedigree — for some reason the Burton beers in general and my metabolism are not on particularly cordial terms. But if I were I might be having to think about reclassifying it and other Marston's products and outlets as haraam. This stuff works both ways.

Further to my comment about Burton ales disagreeing with me, I've just remembered a graffito I saw in the, er, gentlemen's sanitary facility of a pub about 30 years ago. It read,

Has the bottom dropped out of your world?
Drink Bass and have the world fall out of your bottom!

Clearly someone else had the same problem.

I'm sure you really wanted to know that.

Comments:
Haraam they shall be in my household too.

The effect of Bass (for men) on the workings of the bowels was well known in the 60's.

I remember this slogan well - mainly because it was one of the few which were true !