Go and wave your flag somewhere else

UK MSM acknowledgment of the evolving Camp of the Saints scenario remains remarkably muted. Russia Today (RT) is less reticent. It its report from Lampedusa, broadcast this morning, I found this image telling: 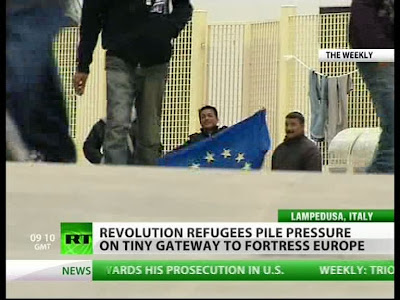 Looking forward to your new life in Europe, are we son? Where the streets are paved with gold. The Catch-22 is that if you and the rest of the Maghreb migrate to Europe, you will turn it into the Maghreb and you will be as poor as before. I am as unconvinced by your faux "patriotic" enthusiasm as I was by all those South Americans waving the Union Flag and mumbling an approximation to "God save the Queen" in Trafalgar Square two years ago.

Do us all a favour. When everybody has calmed down a bit and the next tranche of dictators has been installed in North Africa, just fuck off back and try and make it work.

A Maghrebi "refugee" on Lampedusa, interviewed by RT (voiced-over translation):

"We are historically a free nation and we want freedom of Islam. We want to live as the Prophet told us in the Holy Books, to live in an Islamic state."

Comments:
Polly's got a house going free most of the year ?