Between Kingsway and Drury Lane, in that part of central London which the estate agents would like us to call Midtown (or very possibly MidTown), runs Great Queen Street. Whether this noble thoroughfare is actually named after some notorious homosexualist of times gone by I know not, but I do know that it is home to the United Grand Lodge of England.

It is a dangerous area for the unwary, for a wayfarer cannot get but ten yards along the path before he is accosted by gangs of besuited men in aprons, aggressively rolling up their trouser legs at him. Actually, for a supposedly secretive society, masons are easy enough to spot even in the mufti of their standard-issue dark lounge suits — you can easily distinguish them from Mormons, Scientologists and IBM mainframe salesman by their oddly shaped briefcases in which they carry their secret implements.

Before disappearing into the confines of the lodge to embark upon their devilish rites, the masons forgather in one of or other of the local boozers, typically the Hercules Pillars or the Prince of Wales. Curiously, they don't seem to frequent the Freemasons' Arms — too obvious perhaps — or the O'Neill's Oirish Bar — too downmarket.

(Weirdly enough, you can buy "Masonic Meerkats" in the Freemasons, little meerkat dolls about a foot high* each wearing a tiny masonic pinny. They're a fiver apiece. I assume it's some kind of charity scam; I've never summoned up the courage to ask.)

The masons are an amiable enough bunch, and there's many a funny handshake I've had from them. Which is either flattering or vaguely disappointing — I'm far too irredeemably scruffy to be a mason, even an undercover one.

Anyway, to the quick. The lads' preferred watering holes are, like most central London boozers, a tad on the pricey side. The £4-a-pint price barrier is well in sight and may well be breached sooner rather than later after our new Chancellor has done his worst. The other day, and not for the first time, I saw a group of masons drinking in the Shakespeare's Head, which for those not initiated into these matters is the local Wetherspoon outlet.

Now when the freemasons start queuing up for the cheap beers in the local 'Spoon, you know times are really bad.

Actually the Masonic Meerkats are nothing like a foot high. Barely half that if anything. 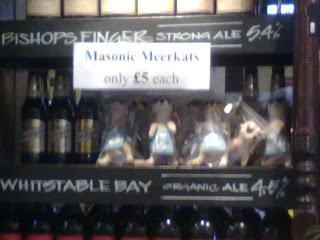 Amazing how the memory plays tricks. And they talk of prosecuting the Bloody Sunday soldiers after 38 years or nonagenarian KZ guards after 65 years. OK, I'm comparing recent trivia with ancient trauma, but if I hadn't stumbled across that snap I would have carried the firm and unshakable conviction that those dolls were at least 30cm tall to my grave. Just as well it's not a distorted memory that could hang someone.