Off into London to purchase some shirts from one of Messrs Marks and Spencer's numerous emporia, garments lovingly handcrafted by ethically sourced Bangladeshi slave-labour as they assiduously scrimp together the price of the airfare to come themselves to London where they hope to throw themselves upon the generosity of the public purse in the Islamic Republic of Tower Hamlets.

Marks and Spencer's has many branches throughout the land, but in my experience the suburban and provincial ones are curiously limited as to stock, selling only ingenious posh (and pricey) sandwiches and underpants in somebody else's size. This is true even in the City of London, where I worked for many years. (I mean City of London in the topographical rather than institutional sense, I hasten to add before the Starving Hordes of the Repossessed set out to track me down and beat me into a well-deserved pulp. I am definitely not a merchant banker; though there have occasionally been impertinent allegations to the contrary.) Underpants on sale in the two quite amply sized City M&S branches were either huge or minute with nothing for men of more conventional dimensions such as moi. After a few fruitless visits I found myself speculating if local demand came entirely from corpulent city stockbrokers and the sort of weedy undernourished teenaged office juniors who feature frequently in Mr Dickens' novels and would, had they been born in Ireland rather than London, have almost certainly have ended up as jockeys.

Over the years I have learnt that, much as I still admire the quality and consistency of their merchandise, the only way to ensure at least a sporting chance of finding clothing in my size and which appeals to my really quite undemanding taste is to shlep into London and visit one of the two "flagship" stores at Oxford Circus and Marble Arch.

And so it was that I found myself waiting on a railway platform in South London on a pleasant spring afternoon. And here are some numbers to justify the title of this post. About 100 intending passengers, possibly more, were waiting on the up platform in the hope of securing transport into London. (It's a busy station, even on a Sunday.)

Of those fewer than 20 were White.

Before visiting M&S, I called in at the Clachan, a public house near Oxford Circus. It's a Nicholson's house (Nicholson's being a London subsidiary of the national pubco and restaurant chain, Mitchells & Butlers). In the weeks before a general election, Nicholson's run a "Vote with your Throat" event in selected houses. A popular beer, in this case Fuller's London Pride, is set up on three adjacent handpumps. The handpumps are coloured respectively red, yellow and blue and customers are invited to order from the handpump corresponding to their political preference. Here's a picture: 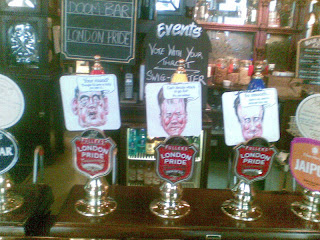 Not one of my better ad hoc efforts with a mobile phone, I'm afraid. If pass that way again in the next day or two, I'll see if I can improve on it. In the captions, Brown's refers to bullying to pay for the round, Clegg's to indecision and Cameron's to smoooothness.

All good fun. I had the Jaipur, since you ask. Very nice, but seriously strong falling-over water to be consumed in moderation even by the hardened toper.

Anyway, the numbers. As of yesterday afternoon, the "Swigometer" read

Given that the Clachan attracts a significant tourist trade who would have no idea what was going on, the representativeness of the sample is perhaps not entirely to be relied on.

Make of all that what you will.

(Incidentally, for the avoidance of head scratching, there is no specific connection implied or intended between the demographic distribution at the railway station and the political views of beer drinkers. The two events were simply numerical observations I made on the same trip and struck me as mildly interesting.

If you do manage to conjure up a connection, feel free to award yourself the Gunga Din Memorial Prize for Smartarsery, Second Class.)

(You can't really call an addition made immediately after posting, an "Update", can you?)

Readers who use Blogger will know that Google displays a selection of adverts to you immediately after posting, based upon the wonderful Adsense algorithm's interpretation of the content of your post. Here's the one which was triggered by the above content: 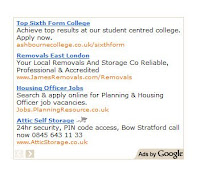 As I said before, make of that what you will.

Your blog is so excellent. I am your regular reader of your blog.

Hey i am interesting in adding your http://dogwash48.blogspot.com/
in my blog
http://spacestation-shuttle.blogspot.com/

I am honored to add it to my Great Blogs list.

Will you add my blog in your blog list.

Thanks for visiting my blog as well!